The Seoul of Hockey Can Live Anywhere

It was February 17, in Seoul, South Korea, the location of the 2018 Winter Olympics. In the first year without NHL players participating since 1994, the Olympic Athletes from Russia were the favorites, as the Kontinental Hockey League had ceased play so Russian athletes could participate in the tournament. The Pavel Datsyuk-led squad was set to play after posting a 1-1 record, although they were coming off a dominating 8-2 victory over Team Slovenia. Their opponents, the United States, also came in 1-1, fresh off a hard-fought 2-1 victory against Slovakia. How were people in the United States preparing for the game?

They weren’t. In fact, if you had asked anyone in the U.S. about the 4:10 pm EST start time, it’s likely most wouldn’t be able to tell you the name of a player on the U.S. team, let alone who their country’s opponent was that day. In fact, the men’s games saw an average around 1.4 million viewers in the states, which was three times less than some games in the 2014 Sochi Games.

For some, though, this was a marquee match-up. Surely, the rich history between Russia and the U.S., both from the 1980 Lake Placid Games and 2014’s shootout marathon in Sochi, adds excitement, but this was live professional hockey with American skaters battling just north of the Han River in South Korea.

For some, this is as close to a live NHL game as it gets. 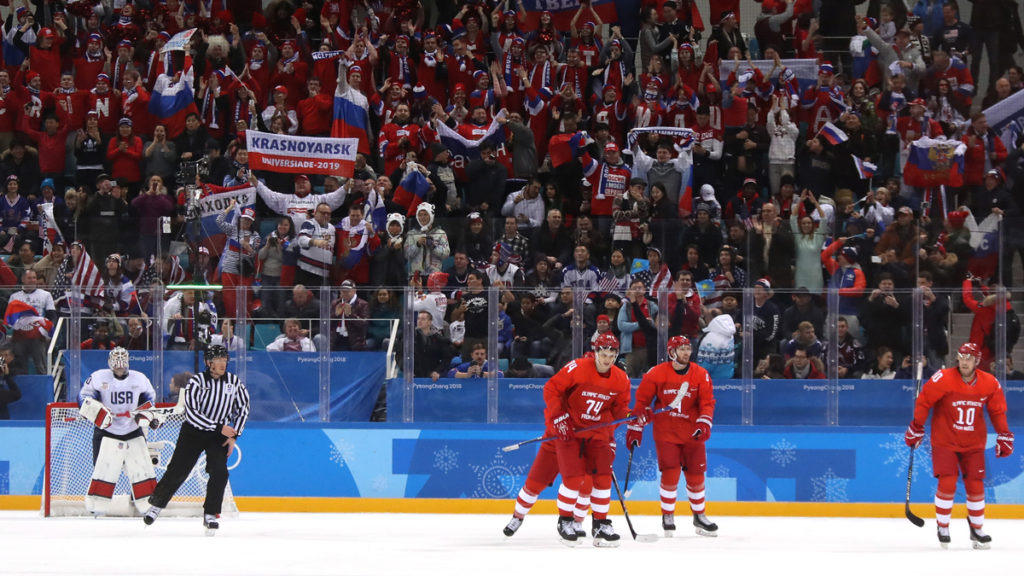 One of the 6,473 in attendance for this matchup was United States Air Force Technical Sargeant Tom Moldenhauer. He took a three-hour bus ride from the Osan Air Base to be at the contest, happy to see live pro hockey again.

“It was great to be there and experience Olympic hockey,” Tom said in a phone interview a few months later. “(American and current Boston Bruins forward) Ryan Donato looked amazing; by far, he was the best U.S. player. (American and current Minnesota Wild forward) Jordan Greenway was great to watch. He was mucking and grinding like crazy. It was fun seeing (U.S. captain) Brian Gionta play again, too.”

Although the U.S. was defeated by OAR 4-0 in the contest, Moldenhauer still enjoyed every moment of the experience. 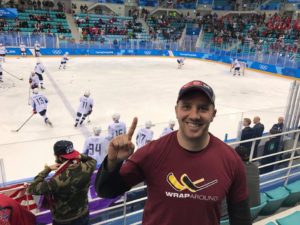 Moldenhauer at the Olympics

“Ilya Kovalchuk had two goals for Russia” he said. “The second was an absolute snipe. Even though we lost, I was captivated by the high level of competitiveness.”

The journey from Osan to Seoul is familiar to Moldenhauer. The Wisconsin native makes the trip often, as Seoul is home to several hockey rinks and the closest to where his base is located. To get his hockey fill in, Moldenhauer takes the train into town to play hockey with a large mix of nationalities every Sunday.

“We have Americans, Canadians and Koreans,” he said,  “There’s even a Czech dude that plays with us. It’s definitely a great mix of all nationalities that play and quite the melting pot of people who just enjoy the game from all over the world.”

Moldenhauer admits that he could play twice on Sundays if he so desires, as he’s become friendly with two teams — one in the morning and one in the evening. The Seoul Chiefs skate in the morning for 1 1/2 – 2 hours, while the Gecko Glaciers play in the evening for about the same time frame. In total, he has the opportunity to play anywhere between three and four hours every Sunday. 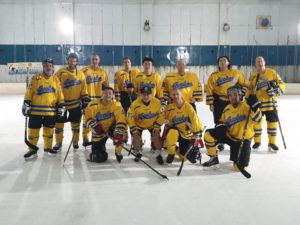 Tom and his Okinawa Tournament Teammates

The father of a five-year-old even has joined the Gecko Glaciers for a few tournaments, most recently in Okinawa, Japan. The 1,350-mile round-trip quest was a military-run event, played with five teams over an entire weekend. Typically, though, the hockey that Moldenhauer plays consists of a pick-up style that isn’t seen much in North American rinks. Teams are picked beforehand and the group plays mini games, with the winning squad getting to five goals. Once a game is complete, the goalies switch sides and they do it all over again. Moldenhauer, a hockey player since the age of 7, calls it “a strange scrimmage style that keeps it competitive,” and “it works better than any scrimmage style” he’s played.

If that wasn’t a shock enough to the longtime Minnesota hockey fan, the skill level of the natives was.

“There are some Korean players here that are extremely impressive,” he said. “This one Korean kid, 19 or 20 year old, is unbelievable. I have no idea where he’s learned the skills he has, maybe a skill coach, but he’s impressive. I don’t think he gets to play in many games. As far as I know, he only skates and plays tournaments with the Chiefs and Geckos. Also, another Korea native I play with has played in the U.S. and Europe for awhile and has some of the sickest hands I’ve seen. There are some really skilled guys, but, I don’t think they really have the team aspect that you and I are used to.

“It’s a completely different type of development than I’ve ever seen.” 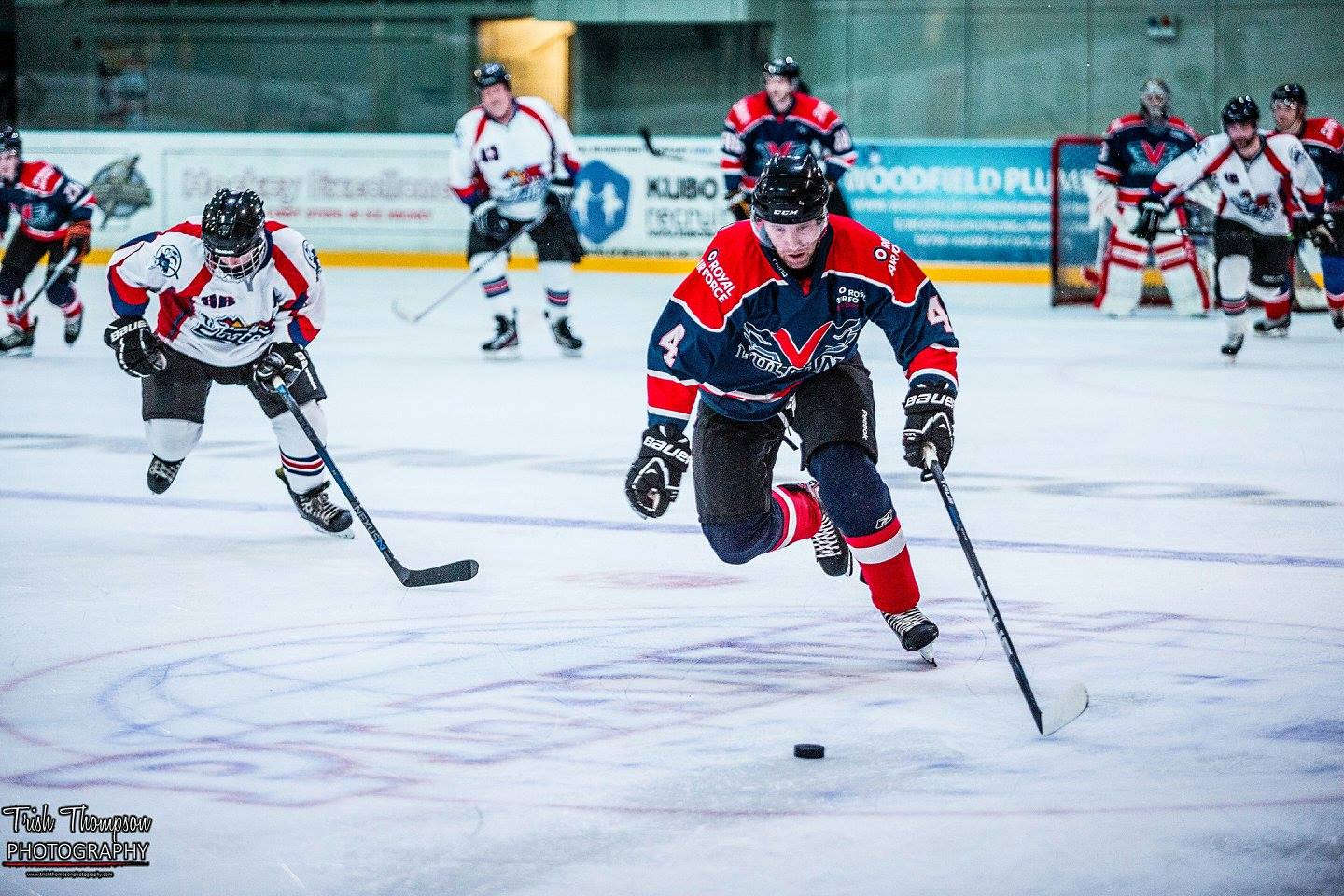 Active for over 16 years, Sgt. Moldenhauer confesses that his obsession with the sport began as most players’ do. After seeing his neighbor play in the driveway in his hometown of Eau Claire, Wisc., the young sports enthusiast wanted to give it a shot. After picking up a stick and shooting on the net himself, he was hooked.

“There was an outdoor rink about six blocks from my house and I would go there every chance I got,” he said with excitement bursting through his voice. “(I was) first one on the ice, last one off the ice. Once I tried it, that was the end of it; there was no turning back.”

His love for the game never seemed to dwindle over time. Playing through middle school and high school, the now 35-year-old has played hockey on three continents and numerous cities. His many stops include Pensacola, Fla., Peterborough, England and multiple spots in Europe and Asia, all during his travels with the military.

That doesn’t mean he was ready for hockey to be so available to him every time he enters a new base. In fact, the sheer number of rinks in South Korea was a shock to him. 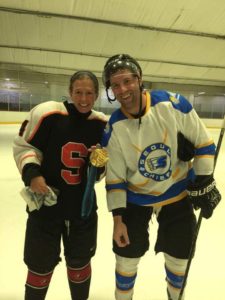 The truth is that South Korea already has three professional teams in the Asia League Ice Hockey (ALIH), while ball hockey leagues are forming across the country. There are six listed indoor ice rinks in the Asian country, which would fit between the Los Angeles and San Francisco areas, comparatively speaking. There are also at least nine outdoor rinks in the area, mostly meant for ice skating.

Internet and smartphone technology has been instrumental in Moldenhauer’s ability to stay up-to-date with the North American game, too. NHL.tv and the NHL app allow Moldenhauer to keep up with current game scores and news. Most importantly, though, AFN (American Forces Network) is available to the base, and Moldenhauer is able to watch hockey through there.

“Most games start at 8 or 9 am and I get all the West Coast games until about 1 or 2 in the afternoon,” he said. “While at work, we always have the game on in the background.”

He also gives credit to fantasy hockey, which he is able to play from afar. This keeps him in touch with the league’s top scorers and top-performing goaltenders, while also providing him with enough statistical data to allow him to determine which players are outperforming others.

All of this access to hockey allowed Sgt. Moldenhauer to win the WeLive.Hockey Trivia Challenge, which was conducted earlier this hockey season and featured all 31 NHL teams in 31 days, allowing fans to answer questions based on each team. At the end of the contest, he won with __ points, which was a slim __ points ahead of second place.

Moldenhauer, who lists Mike Modano and Zach Parise as two of his favorite all-time players, researched NHL teams as much as his work allowed before answering the trivia questions every day. 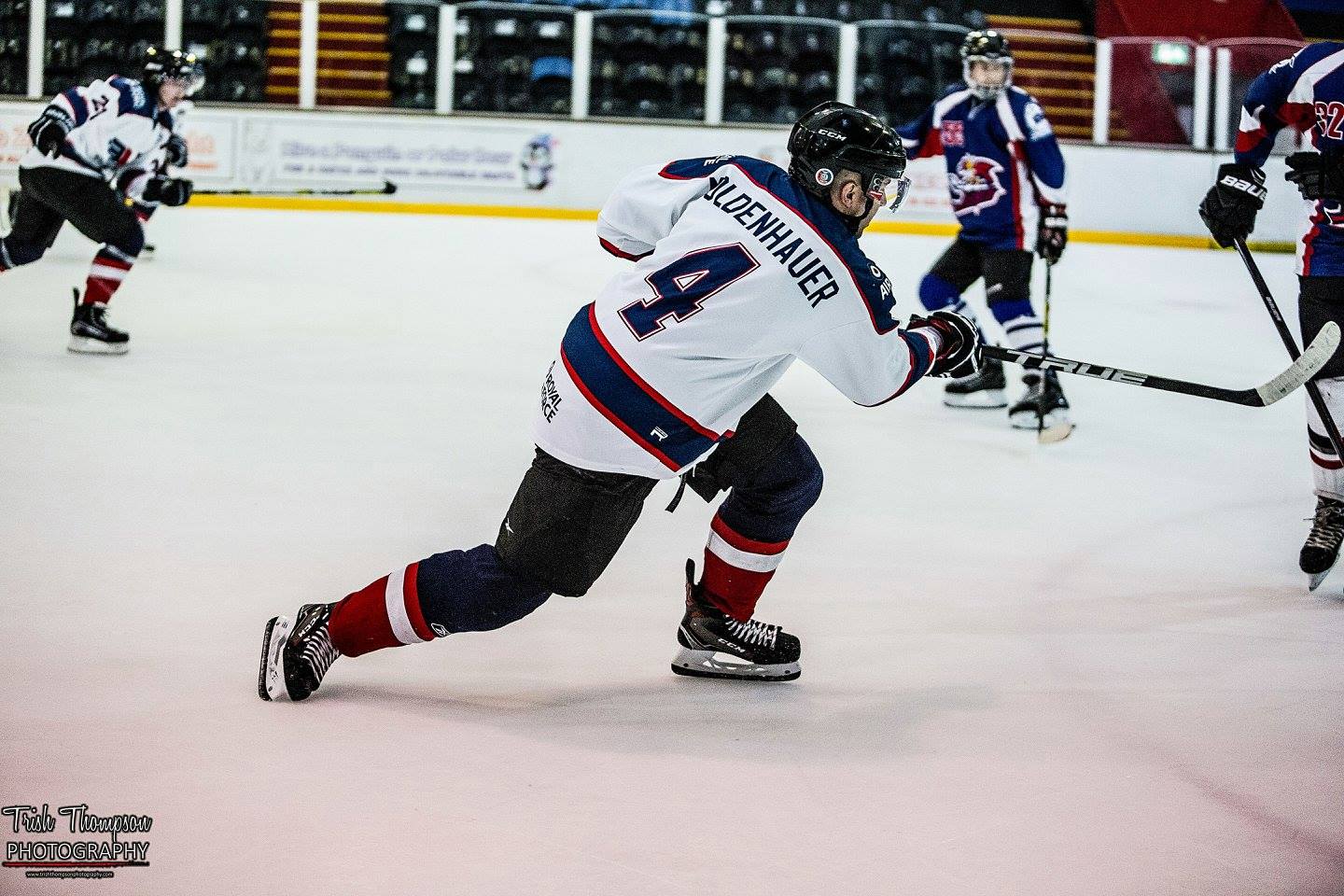 “I’m pretty busy here, so I don’t get to keep up with hockey as much as I would like,” the on-aircraft worker stated, “but when I have the opportunity to, I’ll watch all the 5-min. highlights. I have access to it, I just don’t follow as much as I’d like. I keep up as much as I can.”

When his active service ends in October 2022, Moldenhauer plans to remain active in the sport and even will be seeking employment in the hockey industry.

“I just love the game,” he said. “I’ve known Lee (Elias) of WeLive.Hockey for many years. His wife was assigned in Pensacola and in England at the same time as me, and we played together for about four years total. We talk a lot and when I retire from the military, I hope to somehow be involved with WeLive.Hockey. It’s another way I’ve been able to keep up with the game all this time and it just seems like the logical next step for me.”

The game may not be as easy to find in South Korea as it is in the sargeant’s home country, but one thing is certain: it never leaves his side, no matter where he’s at.

From Eau Claire to Peterborough, U.K. to Seoul, South Korea, hockey has made its mark and will only continue to grow. It’s more than a game — it’s a lifestyle, an attitude and a way of thinking.

The gear, the pace and the strategy make it a remarkable sport. However, it’s the people that make up the sport’s soul. 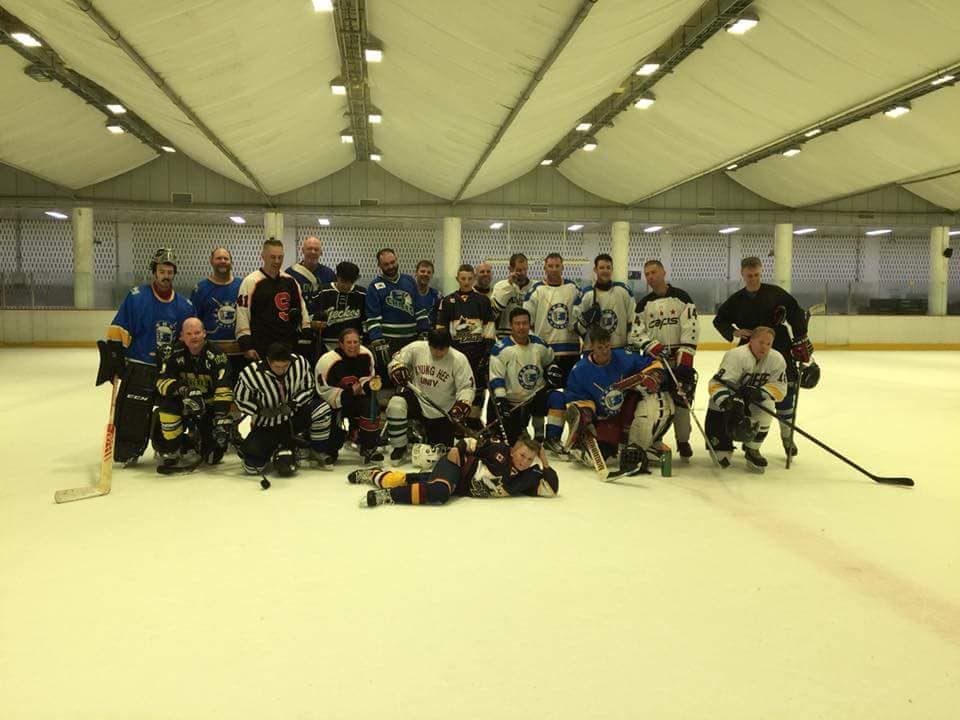 Moldenhauer and many of his Korea teammates

A special message from Tom:

If you’re looking to play hockey in Korea:

I want to thank my wife for being there and supporting my obsession of hockey. I know it’s been a lot of trips, late nights, and being away from home, but It means the world that you support my hockey habit, I am very grateful to have you, and you being understanding of my passion. I’m lucky to be with someone that understands that. I love you.

The Seoul of Hockey Can Live Anywhere

It was February 17, in Seoul, South Korea, the location of the 2018 Winter Olympics. In the first year without NHL players participating sin...

You probably have an idea in your head already as to what you’re getting the fan in your life. But what if he or she already has it, and you...

They put hockey over family, work and other recreational activities (sometimes). The weekend warriors and weeknight grinders put hockey on a...